Green IT to Save the Earth

Like eco-friendly products that we use in our daily lives, there are also green data centers in the IT industry.

There are many products in our daily lives that are labeled with green ratings and eco-friendly certifications including industrial goods, detergents, toilet paper and electronic devices. Consumers who are keenly aware of environmental issues like climate change show preference for such products, and companies are also actively reflecting such trend in their marketing strategies.

What’s more, a certification mark on low carbon emission is now being introduced to all kinds of products. It indicates the amount of carbon consumed to produce a product and is referred to as the “carbon footprint” label. This term came from the idea that we leave an invisible footprint on earth when we use energy and emit greenhouse gases like carbon dioxide. In case of Korea, it ranked 53rd in the global ranking of greenhouse gas emission as of 2020. It is said that the carbon footprint created by a person per day is over 3kg, which is quite larger than expected. Nearly everything in our life including food, electricity, fuel and even air is made of carbon.

There is an industry experiencing an exponential growth of carbon emission in the 21st century: the IT sector. For example, as data in Facebook and Youtube accumulates by hundreds of times, the electricity that goes into the servers and IT systems needed for storing such data increases as well. Since carbon consumption is essential for the production of electricity, the IT industry now faces an overarching challenge of making environmentally-friendly changes to its data management. What’s more surprising is that we can save a tremendous amount of electricity just by emptying our email trash folder or deleting an unused Youtube video, and that the amount of electricity used by a single data center is as huge as the amount of electricity spent in a local city.

That is why global tech companies including Google, Microsoft, and Amazon are developing special dedicated servers to reduce the electricity spent by their data centers, and are transferring their IT facilities to shared infrastructures to cut back on carbon emission. All of these efforts are referred to as the “Green IT” practice.

For its data centers, Microsoft is applying EC3, which is a tool used for managing carbon emission volumes, and is also working on extending the lifetime of its servers or designing them in reusable ways. All of these tasks are tricky and complex as all aspects of data centers from initial design to surrounding environment should be taken into consideration. Nowadays, it is becoming a must for companies to individually design and use servers of their own.

In line with this trend, Korea has introduced a green data center certification system that assesses data centers based on various indicators such as cooling efficiency, reduction of power consumption, energy efficiency, and carbon efficiency index. Put simply, it is an accreditation on “eco-friendly data center.” Most of renowned Korean companies including Samsung, KT, LG, and POSCO have obtained this certification on green data center. Notably, Samsung SDS is implementing RE100 (a campaign for increasing the share of renewable energy to 100% in the energy portfolio) as part of an effort to operate green data centers on a global level, and is deploying a wide range of technologies including solar hot water heating system, solar power and geothermal cooling/heating system, and fuel cell technology. 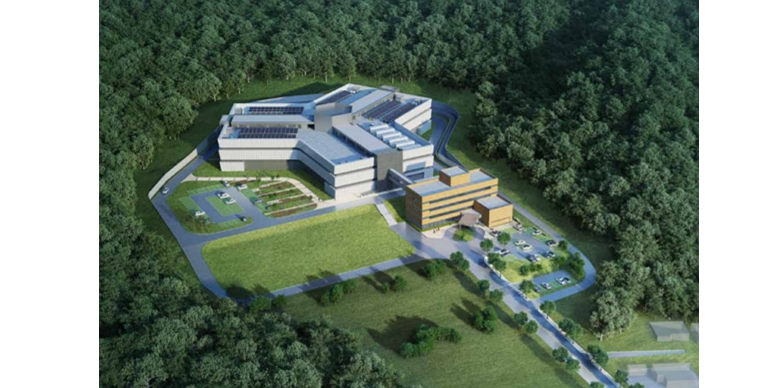 Samsung SDS’s Chuncheon Data Center is designed in Y-shape which is optimal to take advantage of the natural winds from the mountains.

One of the most common examples of environmental destruction is the scene where whales, polar bears, and seals lose habitat due to the melting icebergs in Polar Regions. However, it has been said that these species are hard to track because they live in the furthermost regions of the globe and cannot be easily spotted with human eyes since they move around fast. To address this, scientists are now applying image deep learning to accurately identify the animals and are using sonar detection technology to detect the changes in the population of underwater creatures. According to Dr. Erin Moreland of Alaska Fisheries Science Center, it usually took 1 year to find 7,000 to 9,000 animal species in 1 million images with human eyes and infrared camera, but that time has now been shortened profoundly with the application of AI.

Not only AI but also big data are used to collect and analyze environmental data. “eBird” developed by the Cornell Lab of Ornithology is a free database that is open to all people around the world. Information on bird species and population is registered on the database, and a global map on bird migration and habitat is created based on such information. It may be difficult for ordinary people to clearly distinguish bird species, so when users enter in a picture or video of a bird, the database provide information on the species.

Such use of data can help preserve endangered species, while enabling early detection of ecosystem destruction resulting from the reckless inflow of exotic species and contributing to the prevention of poaching.

Smart city: the effort to change cities that serve as carbon emission hubs

New York, which is one of the world’s leading cities, emitted nearly 56.5 million tons of carbon dioxide in 2020 alone. The amount of greenhouse gas it releases is as astounding as its long history of Broadway and Wall Street. However, the city recently announced that it will pursue the goal of becoming “Carbon-Neutral NYC” by bring down its net carbon emission to zero by 2050. Then, what are the efforts underway to achieve this goal? First, the city implemented a program for replacing the nighttime lighting of more than 650 buildings with LED to cut back on unnecessary electricity consumption, and as a result was able to reduce 200 metric tons of greenhouse gas per year. Also, it introduced automated meter reading to reduce water consumption by 1 billion gallons a day, and set up smart garbage cans that can efficiently collect 10 thousand tons of garbage thrown away each day. By reducing the time needed for collecting garbage, the city was able to reduce the exhaust gas emitted by its garbage trucks.

Smart city technology is what makes all of these activities possible. Since 2020, New York has been expanding the areas subject to its smart city project by using IoT technologies and sensors. Technologies like EHS (Environment Health Safety) are being used to enhance the power and heating efficiency of more than 900 thousand buildings in the city. At first, EHS was a service that supported energy management and use of renewable energy at airports, harbors, factories, or large-sized buildings, but is now emerging as a key sector essential for raising efficiency in the low-carbon economy.

Moreover, New York is expanding the installation of charging stations to secure infrastructures necessary to meet the needs of more than 1.5 million electric vehicles. In carrying out this task, the city should determine the locations of charging stations by reflecting the analyses on traffic volume and travel time. And that is why it is holding software events like hackathons (Hacking + Marathon) where various public data such as traffic volume, atmospheric environment, water quality, and use of electricity are disclosed and participants present new ideas based on the given data. So not only IT technologies but also the way tech companies work are being a great help in New York’s endeavors towards smart city and low-carbon future.

Today, we looked at how IT technologies are used to protect the environment and save the earth. Hope you all have a chance to think about environmentally-friendly practices, such as the carbon footprints you created today or whether you turned off the lights before leaving home.